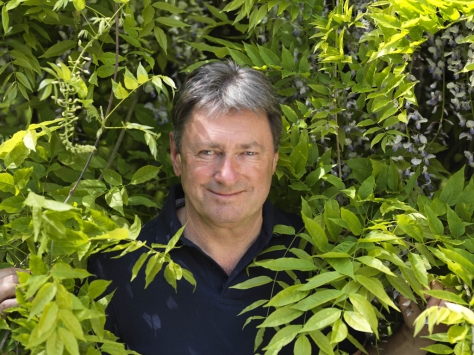 Bridport Literary Festival welcomes ALAN TITCHMARSH to the Electric Palace on Wednesday 9 November at 6.30pm. Local journalist Rene Wyndham will talk to Alan about his life in the spotlight.

Alan is a National Treasure whose hugely popular Gardener’s World and Ground Force TV series have made him one of the country’s best loved television presenters. He was the star of The Alan Titchmarsh Show for eight years and is now host of Masterpiece, a TV game show featuring antique treasures.

The author of over 40 books on gardening, Alan has also written three volumes of autobiography as well as seven best-selling novels which have won him a whole new readership.

Alan’s eighth novel:  Mr. Gandy’s Grand Tour is guaranteed to be another hit.  The hero of the book, Timothy Gandy, has for 40 years aspired to abandon his humdrum existence and embark on a Grand Tour of Europe, following in the footsteps of eighteenth century aristocrats. When the opportunity arises, he is propelled into adventures that he could never have foreseen and which amount to a voyage of self-discovery as well as the wonders of humankind found in unexpected places.

Tickets are £10 each from the Bridport Tourist Information Centre, telephone 01308 424901. See Bridport Literary Festival’s complete programme on their website HERE.