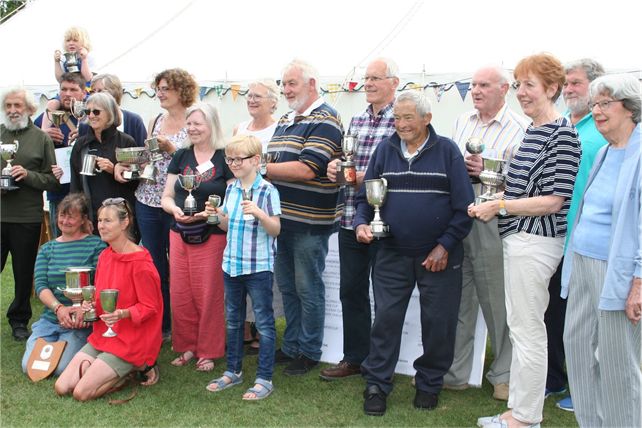 Roy Keeley, one of our long standing Uplyme members and Horticultural Show exhibitors, passed away at the age of 80 in May.

Roy came to Uplyme from Charmouth aged 9 and started gardening with his dad, Walt, aged 10. From 1968 Roy, his wife Ann and Walt ran Blossom Hill Nursery in Pound Lane growing plants, flowers, fruit and veg. Over the years they supplied Hartleys with fruit and veg for their shop in Lyme Regis, Potters Funeral Directors in Axminster with flowers and Otter Nurseries with plants, as well as selling direct to the public from their nursery and home.

Roy exhibited his produce at the Uplyme and Lyme Regis Horticultural Shows for over 40 years, both summer and autumn, initially in the Professional classes when we had Amateur and Professional classes, a distinction abandoned in 2003. He regularly won prizes and cups including the 1977 Woodroffe Challenge Cup for the most points in flowers and foliage.

He won the Banksian medal for the most points in the horticultural classes at least six times, most recently in 2014. Roy had many successes with tomatoes and onions, and begonias and carnations, winning the Williams Challenge Cup for the most points in fruit and veg in 2014 and the Worshipful Company of Gardeners Award for the best flowering plant in 2016.

Fittingly in 2019, the 90th anniversary of the Horticultural Show, Roy won his final cup – the Seamark cup for the best exhibit in flowers and foliage. He’s 5th from the right in the photo above.

Gardening to the end, Roy took pride and joy in consistently producing high quality plants, flowers and vegetables which we were lucky enough to share when he exhibited at the Horticultural Shows.