The planting was carried out by year 7 and 8 students, supported by sixth formers who are working on the garden as part of their Duke of Edinburgh award. The orchard will help the Gardening Club in its ambition to grow more food crops, supplementing vegetables and herbs that are being grown in a formerly waste area in the school grounds. 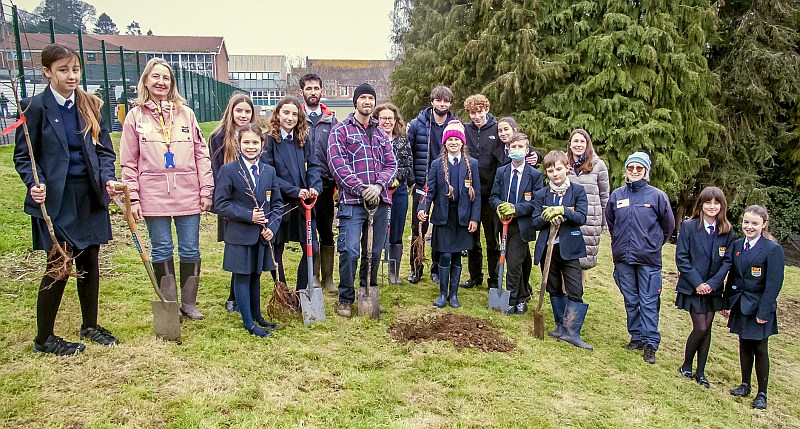 Joanna Benke-Smith, Joanne Neave and Tricia Boyd joined the students for the tree planting, under the supervision of groundsman Jim Johnson-Hills and Head of Humanities Justin Loveland. The eight trees funded by the society included local heritage apple varieties Oaken Pin, Devonshire Quarrenden, Devonshire Buckland and Adams Pearmain, plus two Conference pears and a late plum, Marjorie’s Seedling, which should hopefully fruit late enough for students to enjoy in the autumn term.

Our eight trees were supplemented by another five obtained by the school as part of an ‘orchards for schools’ initiative.  Jim Johnson-Hills said: “It will be great for this group of students who will be able to harvest fruit from these trees when they get to years 10 and 11. And of course it’s ideal to be doing this in 2022 when we’re all being encouraged to plant trees for the Queen’s Jubilee.”

Joanna Benke-Smith congratulated the pupils on their initiative and encouraged them to enter the Society’s Summer Flower and Produce Fair. She said: “It was great to see how enthusiastic these new gardeners are. In spite of the cold afternoon they quickly set about digging planting holes and gently spreading out tree roots, whilst our job was to rescue the earthworms before the watchful robins did. We are looking forward to any contribution they may be able to make to our Summer Flower and Produce Fair in July.”

The school’s Gardening Club developed out of the school’s Environmental Action Team and was set up at the end of 2019 not long before Covid hit. The aim was to clear a derelict area at the top of the school grounds which had not been touched for around 18 years and create a forest garden. This uses trees, shrubs and perennials to mimic the structure of a natural forest and is designed to be biologically sustainable, productive and low maintenance. Justin Loveland, who spearheaded the Environmental Action Team initiative and now the Gardening Club, said: “We always wanted a really practical project for students to work on. They’re creating a usable space that we hope our well-being team will be able to use in due course.”

Not surprisingly, Covid has disrupted the Club’s plans, but students have now been able to clear a sizeable area of bramble and dense undergrowth and install terracing. Last year pupils started growing crops – pumpkins and squashes, beans, herbs, strawberries and raspberries. Jim Johnson-Hills used some of the pumpkin to make pumpkin cake for the students to taste to inspire their future veg growing.

Late in 2021, the Club approached the Uplyme & Lyme Regis Horticultural Society to see if they could help in any way with funding. The Society decided to donate £500 to the Gardening Club, recognising the importance of engaging young people with horticulture early in life. The Society’s donation has made a big difference to the Club. Justin Loveland said: “It’s made the whole project feel more real. We’ve been able to buy tools and gardening kit that mean we can get the students involved in a more hands-on way. This has proved valuable in developing these students’ self-esteem and communication skills. Sixth formers who come to help, act as role models for the younger students and build great links between students across different year groups.”

How the donation is being spent

To date, the funding has been used on a mix of gardening ‘hardware’ and plants. Forks, spades and trowels, wellies, safety gloves and watering cans mean the students can all get active and join in. A 4.5m polytunnel purchased with the funds will give more growing area and get plants off to a good start. The eight trees recently planted, together with spring bulbs such as alliums and scilla, seeds, and dahlias for late summer colour will all help turn the reclaimed area into a productive and beautiful garden. And the funds are being spent carefully, with more left in the pot to use in the future on water butts, tools such as billhooks, and plants. 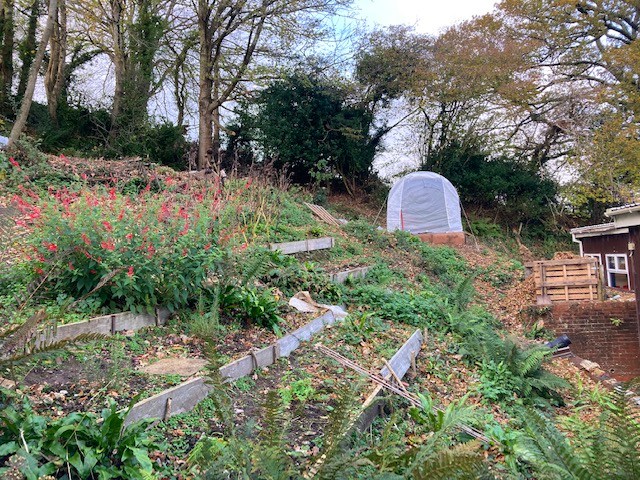 The whole project has thrown up some surprises. At the top of the plot, the remains of a large pond were found underneath a mass of brambles. No one knows the pond’s origins or how it was originally used. It is too large and deep for practical use as a pond in a school setting today but instead an old water trough found on the site will be used within the area as a water feature with suitable surrounding planting. It is hoped that some log seats and benches will eventually make this an attractive area.

Looking to the future, Jim, who has a background in gardening within social enterprises, is keen to expand what pupils can achieve. He said: “We’ll be doing structural work such as hedge laying and teaching students how to take cuttings and graft trees. We’re also looking to grow more food that can be passed on to the food tech kitchen and that students can take home to their parents.”

Justin concluded: “It’s going to be exciting to see what emerges in the newly cleared patch. We’re already seeing bluebells coming up and we hope there may be other plants we’re not aware of. We’ve left plenty of rough patches for wildlife and pollinators and the spin-off benefits in being able to grow produce for the Food Department and study the science of wildlife make our school garden a very valuable project.”